When people think of infrared cameras they are usually thinking of one of two types of infrared cameras, so if you are installing the camera or selling them a camera it's important to know what they are thinking. If you don't know what they have in mind, even if they sound supremely confident, you might want to (carefully) ask them what they want out of their "infrared" camera. A minute spent here will pay off in the long run to make sure you and your customer are "on the same page", and it will help you avoid a possibly costly  embarrassment.

First shown on television and in crime and military movies, the garish red, yellow, green and purple display of the FLIR (Forward Looking Infrared, or Forward Looking Infrared Radiometer) camera comes to mind when many laypeople think of "infrared camera". FLIR cameras have a very expensive video sensor array (and support circuits) that detect infrared emissions from any area where the camera is pointed. Any warm person, animal, or object generates (emits) small amounts of infrared light. Hot objects emit more IR light
than warm and cool objects/areas respectively. The difference in the amount of IR light emitted translates to the colors shown on a FLIR display.

FLIR cameras are used in a wide variety of private, commercial and industrial settings. Consumers and professionals use them for building inspection, safety, emergency and hazard prevention and identification. The real-time display available on many FLIR camera designs gives the user immediate feedback and allows them to pinpoint and correct issues that are often invisible to the naked eye. Subtle differences in temperature can even allow contamination to be detected in all kinds of materials, including foodstuffs. Since
physical contact is not required, FLIR devices can capture and monitor temperature readings from distant objects that would be inaccessible or even dangerous to approach (such as bearings in a working turbine or fixtures and objects in contaminated areas that are dangerous to the health of human workers).

The second type of infrared camera - the kind that make up the backbone of surveillance systems in millions of buildings around the world - is less flashy but more far more cost effective. This type of camera has an infrared sensitive video sensor somewhat like a FLIR camera, but is a far cheaper variant. More importantly, instead of depending on the weak infrared light generated by warm objects, IR security cameras depend on reflected infrared light. Since there's not enough ambient infrared light even on the hottest and brightest
days (but then why would you be using an IR camera in the hot sunlight anyway??? not to mention the sun is down at night, duh), cameras that depend on reflected IR light require a LOT of IR light to work. That is why many IR security cameras contain a built in array of infrared LEDs or require an external radiant IR source.

NOTE: The following descriptions are very simplified for the purpose of illustration. To fully describe the operation of lens grinding and infrared light wavelengths would require someone with much greater intelligence and education than myself. So don't base your term paper or research on my admittedly poor (and perhaps incorrect in places, and certainly over-simplified) descriptions.

All of the IR security camera products we supply fall into the second category of IR camera. They are not FLIR-type cameras. Since they depend on reflected IR light, most of our cameras contain a built-in radiant IR LED array - those that do not require an external source of IR for imaging at night.

Night-time imaging in the world of IR security cameras is essentially black-and-white (monochromatic) imaging. During the day and when light is available these cameras produce a color image. When the amount of light drops to a preset threshold (factory set or user adjustable) the camera automatically switches to infrared mode. Day/night cameras stretch the threshold a bit by using a very sensitive video sensor and can still produce color images in extremely low light but unless the camera is also IR sensitive it will stop working
when zero light is available no matter how good the low-light video sensor is. Keep in mind that even at nighttime there is a normally some light from nearby street lamps, signs, and even the moon and stars, so in some situations a good day/night camera can be preferable to an IR camera. The similarity between day/night cameras and IR cameras ends here.

When visible light drops below its preset threshold an IR camera switches to IR mode. If it has IR LEDs, they become active. Video output becomes black-and-white. The quality, sharpness, and the range at which a picture can be "seen" by the camera depends on the amount of IR light available and of course the camera's lens, type of video sensor and support circuits.

The cheapest way to insure good IR mode video is to flood the area with as much IR light as possible. This is usually done by powering up banks (arrays) of IR LEDs. The number of IR LEDs is limited by physical factors. IR LEDs can be large or small and manufacturers can be quite ingenious in packing as many as possible into a small an area as possible. But IR LEDs can cause their own problems, chief among them is heat and glare. Heat destroys electronic components over time. Our cameras beat "heat" problems using a variety of methods such as careful design, material selection and construction, venting and even cooling fans. Glare happens when IR light from the LEDs strikes the inside of protective covers or glass and bounces back into the lens creating "IR haze". This makes images appear less distinct or creates unwanted light/dark patches. Our cameras defeat IR haze using design techniques, special coatings, special materials and integrated lens seperators that physically isolates the lens from the IR LEDs. You can often identify a cheap IR camera by the presences of a foam ring glued to the inside surface of the glass in an effort to surround the lens with an IR light block. This is not only less effective, but the foam breaks down over time and crumbles into the interior of the camera coating all the parts (including the lens) with a fine black dust/grit. You can imagine how that effects image quality in day or night modes.

Along with methods already mentioned, we employ one more technique to insure IR video is always high quality - an aspherical lens. This helps to eliminate the phenomenon known as "focus shift".

"Focus shift" happens when a camera is focused using visible light, and is then used at night (in IR mode) without adjusting the lens. The IR light-only image will appear slightly fuzzy if the camera lens is not adjusted. This is because IR light, being a different wavelength than visible light, strikes and travels through the lens slightly differently than visible light (which was used to originally focus the camera). To bring an IR light-only image into focus an adjustment must be made manually if a spherical lens is used. Obviously this is a
problem if the camera is in a remote location or on the ceiling where you can't reach it without a ladder. An aspherical lens, by virtue of it's non-perfect-sphere shape, is able to refocus IR light automatically. 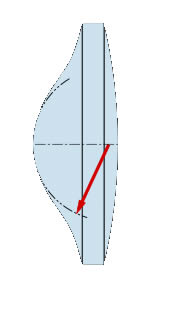 Now You See It, Now You Don't

This article would be incomplete if I did not mention yet one more IR light factor a buyer or client may think about and/or mention. That is of course "visible" infrared light and invisible infrared light. LEDs in our cameras generate IR light in the wavelength of about 850nm. While the light itself can not be seen with the naked eye, the LEDS visibly glow. As wavelength increases, this glow-visibility decreases. When you hit the range of around 900nm and above the glow of the LEDS can not be seen by the naked eye. Some third party manufacturers make radiant LED projectors with 900nm LEDs and above. In the vast majority of surveillance environments 850nm IR light is sufficient and desirable, since most people want to PREVENT crime from happening and if you can see your IR cameras at night, you can bet criminals and those with less than lawful intent will see them too and likely seek an easier target.

Our IR cameras offer you the best and most cost effective means to increase your personal safety and property security in residential or commercial settings. Video quality is consistently high in day, night, and in-between. Regardless of amount of light or type of light, cameras like The COR-553 series, The COR-5I series and The COR-557I series can give your customers peace of mind and possibly prevent property damage or worse. With only a slight increase in overall cost, using IR cameras instead of non-IR cameras can provide superior security in nearly every surveillance network.

OUR FOCUS IS YOUR PROFIT

OUR FOCUS IS YOUR PROFIT | Cortex Security Solutions